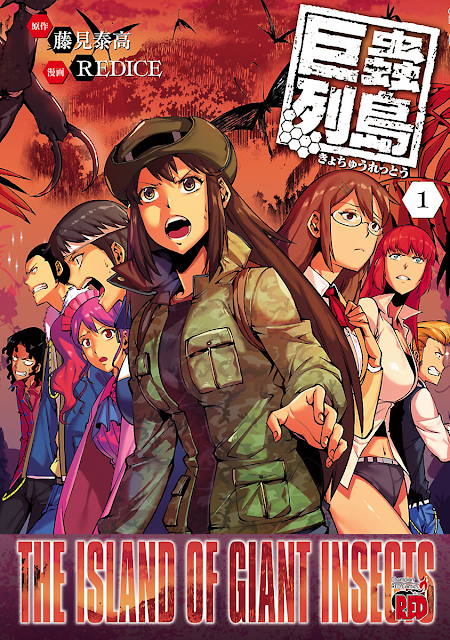 Now, this is what I've been working on the side over the past few weeks. It even took a while to just transcribe all 54 pages on their own, but that and the 6+ hours of typesetting that I had to do and many other misc hours like SFX lookup, watermark removal on every page and such were all worth it. I'm liking the end result. Anyhow, the only reason why I did this was due to a request via email a few weeks back. He expressed his interest and that he contacted a few others but nobody wanted to translate it. However, I'm not one to be sour and not to clap for your two time tag team champions nor to not feel the power, so I said that I would do it since it actually interested me. As for why he asked me, he said that it was because I was translating Terra Formars since it also had bug stuff in it and that I might be interested. Just wanted to share that info, FYI.

Anyway, the plot of The Island of Giant Insects, or Kyochuu Rettou, or if you go by its kanji Giant Bug Archipelago, isn't very hard to follow. A plane crashes on a giant bug infested island, and everyone has to survive while getting horribly killed. Nothing spectacular or original, but the concept (people against giant bugs) is interesting enough to keep you entertained even if it has been done several times in the past. Empire of the Ants is one of them, and there was that MTV movie that I vaguely recall, or at least I think it was a MTV movie. Umm. Moving on. I'll be keeping this on the side so it won't be a weekly release like Terra Formars. However, seeing that only the first chapter was 54 pages, other chapters shouldn't take as long to translate. Now, all said and done, you can find the relevant links below like usual, so check it out, hope you enjoy, and please let me know what you think. See ya!

P.S. - I'm not dropping Terra Formars. I just wanted to get this out first so I'll be starting work on TF 140 right after this. Expect it sometime next week. Also, my PSD's for the first chapter alone is like 455mb. Yikes! Didn't expect that. Lastly, it's kinda funny because even though the author (Fujimi Yasutaka) has done bug manga before, he actually spelt Papilio maackii as Pooilio maackii. A stupid mistake if you ask me.

Update
Oops. Made a little mistake on page 14. Corrected it and updated the download and PDF read online. Nothing major, though. Also, just FYI, this sentence, "You know, you really don't have to be so formal" on page 19 was adapted since it originally said, "You keep calling me Matsuoka-san, but I was wondering if you could stop that?". And since I removed honorifics, it had to be adapted. Just wanted to let you guys know that.