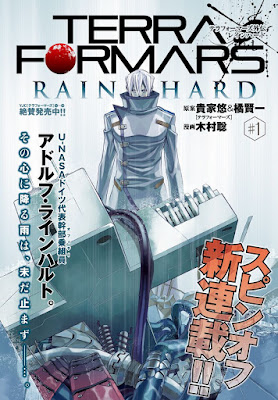 Yup. It's finally here. Terra Formars Rain Hard. Now, art aside, Rain Hard is actually pretty good. The dialogue is nice and the story overall gives us a better look at Adolf and his character, and the situation of the Earth inverse, i.e. B.M.A. I like it. Anyway, I won't hold you too long so I'll just mention a few things and you can be on your way. Now, there were a few odd translation hiccups and funky sounding sentences, so I had to adapt at a few parts. But, it wasn't anything major so there's nothing to worry about. Also, I didn't bother to translate the SFX. Kinda lazy. Though most of it is self-explanatory. I might TL 'em when I come to compile the volume, but that's a might. Again, LAZY! Anyway, the JP on page 30 took up a lot of room and the English text didn't fit right to cover for it, so Adolf on that page ended up with no mouth. Furthermore, at the end, it just said "I met Heinrich", but that sounded awkward as fuck so I added in a "then", FYI. And, lastly, gotta love that credits page! Ah ha ha ha ha ha!! See you next time!!!