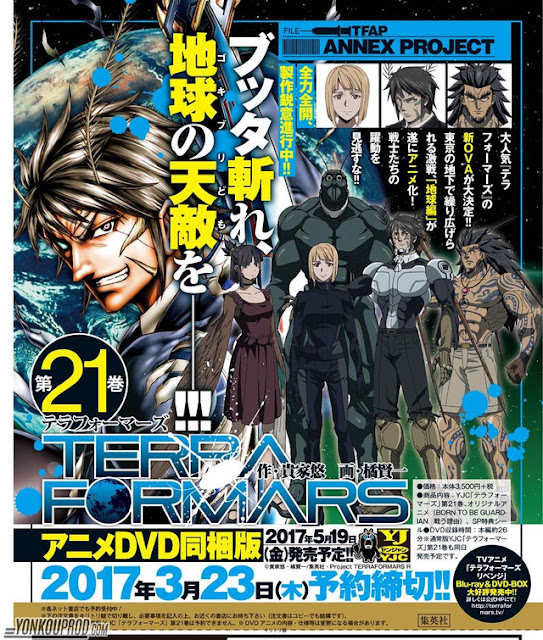 Well, I didn't expect this. They're just skipping the Mars Arc right ahead to the Earth Arc. Probably want to boost sales of the current volumes by getting anime people to get into it, I guess. Anyhow, onto the details. From what I've read here, it seems that it's only 26 minutes long so it's most likely just an add for the manga like I thought. However, what does this mean for TF anime in general? Will they use this as a stepping stone for S3 and simply recap the rest or Mars? Or will this be a one-off OVA and they'll do the rest of Mars? Is this simply part 1 of a multi-part OVA? I need answers god damn it.


Ahem. Anyhow, this comes out on May 19th as it's being released with volume 21 which isn't even that far away. Also, notice the difference of the roach's skin colour in the pic above? Well, that's probably because it's an Earth born cockroach which they briefly touched upon during the Earth Arc if you were a bit confused there. But they never said they were a different colour. Hmph. Interesting. In any case, I am excited for this coming out as more TF is always a good thing. However, I'd prefer if they turned Asimov or Rain Hard into an anime, too. I really want that to happen, but it's very unlikely. Sucks to be me. Anyhow, I'll get started on more Asimov tomorrow. Good night, folks!
Posted by xPearse at 23:25